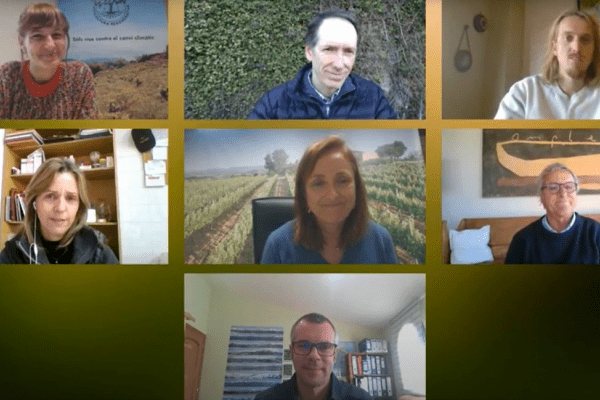 La
Regenerative Viticulture Association
held its first virtual event on February 2 to present the organization, established in November 2021, and to explain the pillars of this viticultural model, which is a solution to climate change. The five founding members (Familia Torres, Clos Mogador, Can Feixes, Jean Leon and AgroAssessor) and Vins Nadal, one of the new members of the association, participated in an event that brought together more than a hundred people.

Miguel Torres, CEO and fifth generation of Familia Torres, recalled that «the association was created to promote a paradigm shift in vineyards, join forces and share principles and knowledge of a new way of understanding viticulture that will help mitigate the effects of climate change and other major challenges such as drought and erosion, in addition to promoting biodiversity».

Francesc Font, founding partner of AgroAssessor Farm Managers, explained the essence of regenerative viticulture and warned that «the planet has 60 harvests left «if it does not reactivate the «three M’s», the great forgotten ones: minerals, microbiology and organic matter. According to Font, it is necessary to «strengthen the system by activating nature» and «the first step to regenerate the land is vegetation cover». Regenerative agriculture «is like a toolbox that serves to improve the soil and improve the environment,» sequestering carbon, slowing erosion and producing healthy food without toxics.

The round table, moderated by the oenologist Montse Catasús, secretary of the association, discussed the challenges and benefits of regenerative viticulture according to the different experiences of the speakers. Mireia Torres, director of Jean Leon, explained that she is researching within the framework of a European project, together with the Center for Ecological Research and Forestry Applications (CREAF) and the University of Lleida, to understand what type of cover crop allows retaining more carbon in the soil and how it affects biodiversity, vineyard vigor and production. Christian Barbier, head of viticulture at Clos Mogador, shared his experience of a decade working in regenerative viticulture, which he defines as a «conscious viticulture based on trial, error and re-trial».

Joan Huguet, co-owner of Can Feixes, was convinced that «we cannot continue tilling the land as we used to» as this has impoverished the soil, a situation he is reversing thanks to the vegetation covers he manages with the help of a flock of sheep. Miguel Torres, in turn, discussed the differences in the application of regenerative practices in Priorat vineyards such as Mas de la Rosa and Mas La Plana in the Penedès and pointed out that «regeneration goes beyond a change in soils, it is a change in people’s mentality».

This was followed by Esperanza Nadal, winemaker at Vins Nadal, who recently joined the association because she sees regenerative viticulture as a path to be taken «out of common sense». According to Nadal, «in the winery we have considerably reduced our emissions, but we still had to work in the field, and regenerative viticulture is the only model with which we feel comfortable and which will allow us to make real progress».

The last intervention of the debate was that of Francesc Font, who stated that the first steps to apply regenerative viticulture consist of «learning, reading, seeing, visiting estates, trying, making mistakes, trying again, but above all unlearning much of what came before and making a mental change, even if there is a toll. In the end there comes a time when you don’t regret anything». The webinar ended with questions from the audience, which the speakers have been answering based on their experiences, and a call to wineries, winegrowers, institutions and anyone interested to join the Association of Regenerative Viticulture to share these experiences and knowledge and join efforts for the benefit of the land and the planet.

The use of earthworm humus in the vineyard improves soil balance and thus wine quality.

Goodbye to plastic is in an insect shell